1946 Municipal Elections and Reflections in Urfa

The 1946 Municipal Elections, which contain some firsts in Turkish democracy, have an important place in Turkish political life. For the first time in these elections, elections were held on the same day and ended on the same day. All political party representatives were present in the election boards, and a stage was made on the basis of secrecy. Apart from the changes made, these elections are interesting as they show different characteristics for the opposition parties. Because the opposition's demand for early elections, which is common in democracies, worked the opposite in these elections, opponents objected to the ruling's decision for early elections on the grounds that they could not be fully organized and did not want to participate in the elections. The Democratic Party boycotted the 1946 Municipal Elections and did not nominate candidates across the country. However, the founders of the DP Urfa organization and people close to these people won the elections in Urfa by entering from the National Development Party list. How the elections developed in Urfa in those years when the opposition complained about the administrative mechanism is an intriguing question. Archive documents and both national and local media of the period do not provide enlightening information on the subject. At this point, the memories of Mahmut Celal Öncel, one of the founders of DP in Urfa and also MP Urfa from 1950-1954, were written in the form of a series of articles in the Demokrat Urfa newspaper in 1955. In these memoirs, Öncel described the process from the idea of participating in the elections to how the elections developed, their propaganda during the elections and how they won the elections, in the Democrat Urfa newspaper nine years later. The most emphasized points by Öncel; The financial difficulties they faced while preparing for the elections are the underestimation of the ruling party and the allegations of fraud in the elections. In addition, according to Öncel, election classifications in Urfa took longer than the country in general. Öncel claimed that, after winning the election, the Republican People's Party members pressured them to resign from the National Development Party and join the CHP ranks. In this article, the memoirs of Mahmut Celal Öncel telling about the 1946 Municipal elections are emphasized, as well as the post-election developments through archive documents and the local press of the period. In this respect, the panorama of the elections to be held in the following years has been revealed. 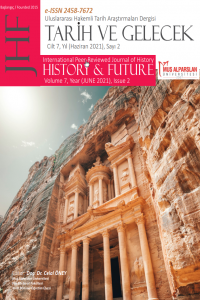