The Journal of International Lingual Social and Educational Sciences

PROBLEMS IN TURKISH EDUCATION AS FOREIGN LANGUAGE FROM PAST TO PRESENT

Language is the same as the state, which is the highest political organization that a society and the society has brought to the table. This mirror reflects both the development of society and the state in the cultural dimension, and its political and economic significance in the international arena. A language awareness also refers to the international scene and power of an area of ​​diffusion and the desire of that country. Indeed, it is undeniable that Britain and the United States (USA), which have been regarded as the unsheltered empire, have become superpowers in the last hundred years when the English is regarded as the common language of the world. On the other side is the fact that the languages ​​of countries such as France and Spain, which pursue an expansionist and colonial policy in the historical process, are widely spoken especially in the geographical region of Africa and even accepted as official language. The fact that languages ​​such as French and German are widely learned today is another indicator of the economic and political strength of the countries where these languages ​​are spoken. On the other hand, it reflects the role of Russia in the world today, which is considered to be another superpower of the Russian world, spoken in a large part of Central Asia and Eastern Europe. For about 600 years, the superpower of the period during which the three continents were ruling, the Ottoman State was spoken, why did not it spread and talk about in the geographical spreads? Of course, there are many different dimensions of this question, many answers. In spite of this, in spite of the increase in the number of people who are interested in the Turkish language today, a desired education policy has not been established. In this study different dimensions of this situation were examined and connected with current problems. 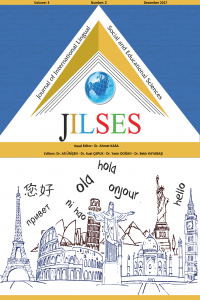