The purpose of this research; to evaluate Mobile Augmented Reality (MAR) activities carried out by prospective teachers for the Social Studies curriculum and to reveal their effects on the participants. Action research, which is accepted as one of the qualitative research methods, was adopted in the research. The study group of the study consisted of a total of 46 pre-service teachers studying at the 2nd grade of a state university Social Studies teacher in the spring term of the 2018-2019 academic year. While Technology Integration Self-Efficacy Perception Scale, Semantic Differences Scale and Personal Information Forms were used in the research, the augmented reality applications prepared by prospective teachers, researcher observation reports and researcher diary were also used as research data. The studies carried out by the participants in the data analysis phase evaluated group and collectively with graded scoring keys (GSK). The data obtained from the observation reports and researcher's diary were used to support the results obtained from GSK. In addition, in order to compare the scores obtained from the technology integration self-efficacy perception scale, t-test for dependent groups and percentage and frequency analysis were performed for the semantic differences scale. Based on the findings, the results are; When the products made by the participants were evaluated, it was understood that they produced qualified products. On the other hand, there was no significant difference as a result of the t-test applied to the participants. Finally, it was seen that the participants evaluated the augmented reality applications as innovative, confusing, entertaining, difficult, unusual, complex and tiring. 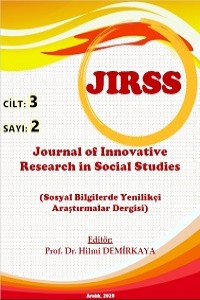