The fact that the growing tourism industry and tourism theory studies as a product of the academic community cannot meet on a common discourse base is considered as weak theory development. Furthermore, this weak theory development poses a problem for the tourism discipline, especially in providing the term and meaning unity at the scientific level. This term-meaning mismatch and groundlessness problem in tourism theory has been the main starting point of this research. The problem in the literature, especially in terms of transferring tourism forms to Turkish has constituted the starting point of the research. In this context, it is a conceptualization problem that the tourism forms defined by international authorities and whose English originals are domestic, inbound, outbound, national, internal and international tourism partially exist in the Turkish literature, and the existing denominations do not reflect the definitions of the authorities. In this context, with the structured online interview, which is one of the qualitative data collection techniques, 41 participants are asked for their opinions, and after data are gathered and the literature review, Turkish equivalents are suggested for the typologically conceptualized tourism forms. For the proposed nomenclature, translation process and western foreign term welcome method, interlingual (translation-oriented) term formation methods instead of borrowed terms, and term derivation methods by creating phrases from the methods are used in the Turkishization of scientific terms. According to the results, the Turkish equivalent for aforementioned tourism forms (domestic tourism, inbound tourism, outbound tourism, internal tourism, national tourism, and international tourism) are suggested. In order to better understand the meanings of these concepts, figure modeling is among the outputs of the research. 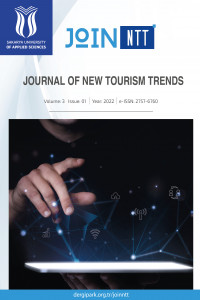