This research was carried out in farms which have 100 and more cows with commercial biogas production capacity, in 2019 in Tekirdağ. This is because it is stated that if the livestock enterprises have at least 100 animals, biogas production can be realized economically. The distribution and number of farms with this feature in districts were provided from Tekirdağ Food, Agriculture and Livestock Provincial Directorate. Biogas is generally used by converting it to heat and electrical energy. While it is used mostly for heating purposes in small farms, electricity and heat energy are provided in CHP units in large farms. Total methane production potential and energy value were calculated as 22466 Nm3day-1 and 81756.4 MWhyear-1, respectively. The highest methane production potential and energy value is in Muratlı district and the least is in Çerkezköy district. It was determined that 42512.48 MWhyear-1 useful heat energy and in CHP unit 28614.17 MWhyear-1 electricity energy and 19784.65 MWhyear-1additional heat energy could be obtained from methane produced by anaerobic fermentation. It is determined that 19067.56 tonsCO2eyear-1 of methane will be released if the manure is stored outdoors. It was determined that methane emission could be reduced by 1087.13 tons CO2eyear-1 if the nitrogen was used in fermentation residues instead of the chemical fertilizer. Total methane retention in the use of methane for heat purposes will be 31590.55 tons CO2eyear-1. Methane emissions will be reduced by 12522.99 tons CO2eyear-1 when used for heat purposes, than the conditions in which the manure is stored outdoors. When methane is used in the CHP unit to provide electricity and heat energy, total methane retention is calculated as 38467.6 tons CO2eyear-1, and the decrease in methane emission is calculated as 19400 tons CO2eyear-1. In animal husbandry enterprises that are located in Tekirdağ and are commercially producing, evaluation of manure without long-term storage by means of anaerobic digestion is important in terms of meeting of the energy requirement and reducing methane emission and the government should encourage enterprises in this regard. 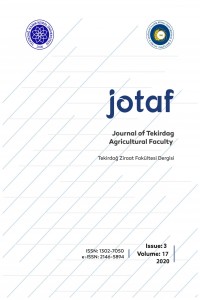