In the beginning of XX. century, a group of authors, poets and artists known as “Vanguardistas”(modernists) paved the way for modern movements in art and literature in Spain with the inspiration from Filippo Tomasso Marinetti, an Italian poet. Leading such movements as Surrealism, Dadaism and Ultraism, Futurism is one of the leading modern concepts. Having its roots from Italia, Fütürizm movement shortly started to indicate its impacts in Spain as well as other countries. It rises to prominence with its appreciation of modernism as well as having an original and dynamic perception. World has been constantly changing. As the communities, countries and lives change, perceptions, ideas and ideals of the people also change. It is necessary for us to embrace innovations and adapt ourselves to these changes with the changing world order and people; we should also handle humans by appreciating them within this framework as an individual. Old traditions, old lifestyles, outdated ideas as well as previous attitudes, perceptions, styles and movements in literary and artistic issues should not be continued; we should focus on the newer, more original and current ones. Having adopted this point of view, Futurism started to indicate its impacts in Spanish Literature in a short while – especially the works of the 27 Generation authors and Ramón Gómez de la Serna. Italian Futurism suggests that previous ideas, literary styles and lifestyles do not have any strong links with today and it is a challenge which will make it difficult to open the doors for the future. Dealing with the original and new issues, Futurism is a kind of rebellious attitude against the order. Having been leaded by Serna since 1908, this movement started to make its name and get accepted in literary meetings held by the intellectual authors and in various magazines. When it was adopted by the authors and poets of that period who had a rebellios character just like in Surrealism, Dadaism etc., it was accepted by the literary world. Futurism which also included absurdism, originality, individualism and rebellion displayed a patriotic attitude without being separated from the national scene although it built a wall against traditional issues within its own philosophy. In this regard, the Spanish aimed at building an original Futurism having its roots from the past and focusing on the future. Protesting the oppressive and censorship ruling of that period, Spanish intellectuals aimed at struggling against the ongoing order with an innovative style and perception by also deriving benefit from Futurism in literature. 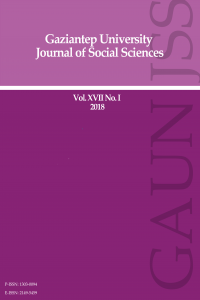