Anew National Struggle Movement is a right-leaning organization, the majority of which are single students, with a weak mass population but with increasingly developing publishing activities. The organization, which was established as an association under the name of Struggle Union Association on 18th November, 1967, consisted of nationalist and conservative young people. The strengthening of the organization is after the complicated periods of Turkish political life, the memorandum of March 12, 1971. Systematic disengagements were experienced towards the September 12, 1980 coup. During this period, the Anew National Struggle Movement made important contributions to the Turkish politics and bureaucracy. Some of those who had a relation with the organization were elected as mayors and some as deputies. The footprint of the Anew National Struggle Movement in the Turkish political life, what the breaking points are and the reasons for the dissolution of the organization are also important. The birth of the organization, its position in the Turkish right tradition, its emblems and slogans were examined, and the main reasons for dissolution of the organization were determined in this study. Since the study was limited to the period from 1967 to 1980, the party formation process after 1980 was not mentioned. 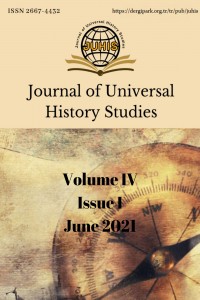 This work is licensed under a Creative Commons BY-NC-SA 2.0 (Attribution-Non Commercial-Share Alike)