Deism is a system that does not accept God's intervention in the world and gives too much importance to reason. According to them, God created the world and did not intervene again. In this context, revelation and prophecy, which are considered to be God's intervention in the world, are accepted as implausible in terms of possibility and necessity. There is a group of Indian origin called Barâhime, who put forward ideas parallel to the deistic thought system. Barahima objects to prophecy in terms of reason. According to them, if there was a concept called prophethood, God would have created it in minds. On the other hand, they claim that reason and revelation contradict, worship is meaningless, and miracles have no reality. When we look at the characteristic features of Deism and Barâhime, it is immediately understood that they are fed from the same source. The human model that these thought systems want to reveal envisages a life style without worship, in which God does not control and question them. Such an understanding undoubtedly brings to mind the belief in polytheism in the pre-Islamic "Ignorance Period". Because they believed in God and attributed holiness to him. It is extremely important for our subject that a community that attaches importance to belief in God does not accept the prophet and the revelation. In addition to believing in God, the polytheists give them jobs, worship, trade, inheritance, etc. He didn't want her to get involved in matters. This shows that they actually adopted a deistic lifestyle. In our opinion, there is a remarkable similarity between the thought of Deism and the understanding of polytheism. The dangers of this Deism, which attracts the attention of some Muslim youth today, reveal the importance of the subject. In this study, the aim is to reveal that Deism and Berahime movements basically serve 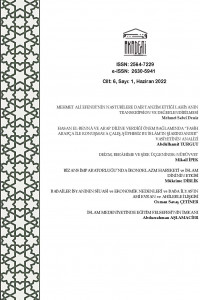