The last period of social history, bandtriy and detective events are very important. The clasical period of the Otoman Empire,  puclic orders and security was provided by the janissaries and the calavaries. After the abolihment of the janissaries, the new arrangements were formed by the goverment. In 1846 Zaptiye Müşirliği and in 1909 Emniyet-i Umumiye Müdürlüğü was also erected to provide security.   In the Ottoman period, the banditries were seen three categories: “Levent Eşkıyalıkları”, “Aşiret Eşkıyalıkları”, “Kişisel ve Toplu Eşkıyalık”. It is seen that the appearance of the banditries were increase the moral and economic deterioration and the collapse of the govermental authority. This inclination is not only the Otoman Empire but also the other counties in the world.. Similiarly in the 18th century, the period, which was investigated, the economic crisses were seen and this caused the domestic governers in the empire. All these negative effects due to the creation of the bantiry. In the 20th century, the war conditions also appeared the banditriy. In this investigation, the crimes reports, were written the First World War, the statistical list about the detective activities around Çorum were benefited. The second part of the investigation aolsa mentioned the effects of the banditry over the social situations. 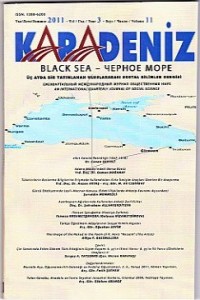