Cities are social indispensables, which are the most important indicators of the political and social accumulation of societies. All of the urban values such as geographical location, climate, natural vegetation, buildings and structures that each city has constitute the identity of the city. One of the important reflectors of the urban identity is the urban spaces that have become the symbols of the city. Urban spaces that respond to various needs of ccitizens are important elements in terms of urban with the values they have and the furnishings that exist in them. While describing these urban spaces that have a place in their minds, citizens sometimes get help from a memory they live, from a building they see, and sometimes from an urban equipment that they use or that attracts their attention. Cognitive maps formed by the combination of these different concepts have an important place in describing the environment of the individual and determining location, distance and place information. The cognitive map, which is shaped in the mind of the individual in line with his/her cultural characteristics, lifestyle and experiences, is an important method that enables the coding of mental processes such as remembering/remembering, storing, acquiring information, solving, accumulating and so on. It is an important method that provides the coding of mental processes such as In this study, the urban equipment in Trabzon Meydan Park is determined and the contribution of the urban equipment to the urban identity and the cognitive map are determined through the urban equipment, together with the questionnaire applied to the citizens. In this direction, the data obtained through the survey and on-site detection studies were interpreted. As a result, it has been revealed that the urban equipment of Meydan Park, which has an important place in the history of Trabzon, especially the Atatürk Statue and the memories of the park are important in determining the cognitive map. 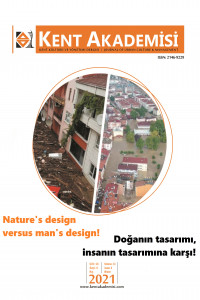