According to the religion of Islam, it is of great importance for people to establish a family in which they will find peace and to maintain this family. But some disagreements that may arise between husband and wife may require divorce. According to Islamic family law, divorce can be realized by methods such as talāq, tafrīq and mukhāla‘a. In Islamic family law, it is called muhâlea contract for a woman to divorce her husband by agreement in return for paying a certain price. When the Istanbul kadı registers are examined, it is seen that the muhâlea contract is a frequently applied divorce method in Ottoman law. In this study, one thousand four hundred and seventy-four cases related to the settlement, including the cases heard in Istanbul and in the bilād-i thalātha (Galata, Uskudar, Eyup), which were in the registry records between the dates 1549-1559 and 1857, were examined. In the research; The database of the Istanbul Qādī Registers project, prepared in 100 volumes under the management of Mehmet Âkif Aydın, was used. Many examples related to the muhâlea in the Istanbul qādī registers are classified under the headings such as the establishment of the agreement, its reasons, the price in the agreement, the results of the agreement, the lawsuits due to the conflict that occurred as a result of the agreement, the lawsuits related to non-Muslims. The records in the registers were examined under these headings and evaluations were made on the subject. Thus, the Ottoman period muhâlea practices and the issues related to the muhâlea are determined in general terms, based on the Istanbul qādī registers. 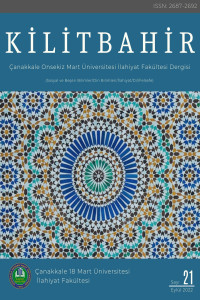