The verb “çık-” (exit) in Turkish is generally attributed to an old Turkic verb “taşık-” (escape) by many linguists since “çık” is not found in texts prior to 11th century. However, to understand the etymology of a word, it should be studied morphologically, phonetically and semantically.The “çıkmak” (to exit) concept is as old as “dış” (out) concept in terms of meaning. Consequently, it is impossible for a verb which means “çıkmak” to derive from a word equal to “dış”. It is not possible to phonetically explain how “çık” is derived from “taşık”, for the phonetic changes that should occur in taşık-> çık- process are not the type of changes that can be found in Turkish. Therefore, it is beyond imagination to think all types of phonetic changes unthinkable in Turkish can take place in the formation of a particular word. This study, by examining the verb “çık” lexically, semantically and phonetically, aims to prove that the verb “çık-” does not come from “taşık”, but it is a root of separate verb 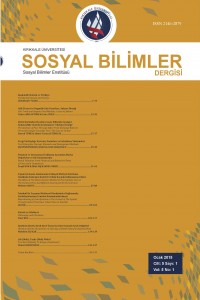