Common Proverbs in Turkish and Greek

Turkish is one of the oldest languages in the world and it is spoken by over two hundred and fifty million people who live in a geographical area that spread from Siberia in Asia to the shores of Europe on the Atlantic. Germany, for instance, is home to a few million Turkish immigrants. As a consequence of their shared language the people of mainland Turkey and the majority of the people in the independent Turkic states in Central Asia as well as the Turks who live in different European countries have maintained close ties with each other while the universal use of the Turkish language also enabled them to create a collective culture and literature. It is a well known fact that many peoples who failed to keep their languages alive did not survive and in time were absorbed or assimilated by more dominant powers. The ancestors of the present Turkish population in Cyprus first arrived in 1571and throughout Ottoman rule, being the language of the sovereign, Turkish was never seriously threatened by local languages, including Greek, which was the tongue of the majority of the population. On the contrary, Turkish had an overbearing effect on the “mother tongues” of the local people; which influence is still very evident today. Although Greek Cypriots describe themselves as the descendants of the Mycaenean Greeks, hence as “Hellens”, they speak a Cypriot-Greek dialect which the Greeks from the mainland find hard to understand. Owing to the strong influence of the Turkish language the local Greek dialect still possesses a rich vocabulary of hundreds even thousands of borrowed Turkish words, idioms, phrases, proverbs and adages which the Greek people have been using for donkey’s years both in their every-day conversations and in correspondence without even realising that they are of Turkish origin. Proverbs are products of spoken languages and orally told folk literature. Below we have listed approximately seventy proverbs which we have compiled from Greek sources. Although proverbs can be found with variations in different countries of the world there is an amazing similitude between the Greek Cypriot and Turkish Cypriot proverbs and in many cases the Greek Cypriot proverbs are just about a literal translation of the Turkish Cypriot proverbs. 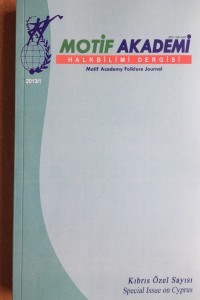