Drought, the effects of which are starting to be felt in increasing amounts today, is one of the most important natural disasters that threaten life. It is extremely important to regionally investigate the drought, which is expected to have intense effects, especially in the Mediterranean belt, and to develop adaptation strategies. Within the scope of this study, drought analysis for Isparta province was carried out with different index methods by using long-term meteorological observation data of Isparta State Meteorology Station (DMI). According to the results of the drought analysis performed at different time scales using Standardized Precipitation Index (SPI), Rainfall Anomaly Index (RAI), Percent of Normal Precipitation (PNI) methods, it was determined that extreme and severe dry periods were experienced in the region in 2008-2009. According to the analyzes made on a 1-month time scale, an extremely dry period has been experienced in 24 different time periods with the standardized Precipitation Index, 43 with the Rainfall Anomaly Index, and 234 with the Percent of Normal Precipitation. In addition, it was determined that there was a strong positive correlation between these indices. Similar results were obtained in meteorological drought analyzes performed at different time scales, especially using the SPI, RAI and PNI indices. 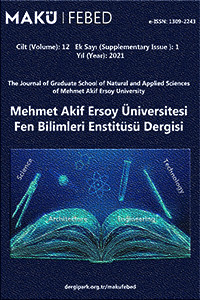