Due to rapid urbanization and industrialization especially near water resources, heavy metal pollution in both water and inland environments have been studied all around the world. In this study, some selected heavy metals (Al, Sr, Cd, Co, Ni and, Pb) and fish species (Mullus barbatus, Solea solea, and Siganus rivulatus) from three Bays (İskenderun, Mersin, and Antalya from North-Eastern Mediterranean Sea) were used for heavy metal accumulation level evaluation and health risk assessment on both general and fish populations. A variety of accumulation patterns for considered metals were observed in tissues. Significant (p<0.05) inter- and intraspecies/tissues/bays differences were detected. The most stable tissue in terms of Al and Sr accumulation was determined as muscle. For Cd, Co and Ni accumulation the most stable tissue was found as liver. Lastly, for Ni accumulation skin was found to be the most
stable tissue. The Target Hazard Quotients (THQ) and Total Target Hazard Quotients (TTHQ) values based on muscle were not exceeded 1.00. Therefore, these results suggest that both general and fish populations are not subjected to the significant potential health risk from those bays. 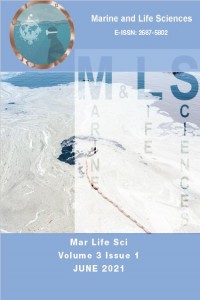