The Conception of Civilization in the Early Republican Era in the Context of Turkish Humanism: İnsan Journal Example

The early Republican era has been a restructuring process full of many problems it has brought with it. The republic is an embodiment of a mentality as well as concrete political steps. Cultural activities created by this mentality include a significant part of the steps taken to put the ideology of the republic on a solid basis. In this study, in the context of its contribution to the modernization and innovations of the Republic, the İnsan journal, which can be seen as a cultural activity based on the discourse of Turkish humanism, will be evaluated. All the copies published while dealing with the journal were examined, and content analysis was carried out by including articles, essays and scrutiny articles focused on humanism. The İnsan journal has a relatively short publishing life. This relatively short publication is the period of the journal's unstable publication, which shows its life a little longer. Published by prominent literary of the time such as Hilmi Ziya Ülken, Nurullah Ataç, Sabahattin Eyüboğlu, and Muzaffer Şerif, the journal had a life between 1938 and 1943 with its 25 issues – some of those were “2 in 1” issues. The outline of this study is to understand how the İnsan journal evaluates Turkish modernization movement the beginning of which can be traced back to the end of the 18th century, reforms of the Selim III's era, and position itself within the modernization debates, especially in terms of Turkish humanism. The concept of civilization that the İnsan journal has opened to discussion beginning in its first issue is important in the context of presenting a new transcends the dichotomies such as old and new, East and West and so on. The contribution of the İnsan journal to the modernization of the Republic in the light of Turkish humanism and civilization imagery, innovative ideas and a holistic world view is also remarkable in terms of showing the place of the journal in the history of Turkish thought. In this context, the İnsan journal should be read carefully not only in terms of presenting the cultural environment of the period it was published but also in terms of showing the tense relationship and future imagination of the Republic ideology. It is certain that there is an important link between the human journal and the Republic ideology. As a result, it can be seen that the İnsan journal contributed to the understanding of culture and civilization of the Republic, especially around the idea of Turkish humanism, and that it produced cultural policy within this framework, as the most important result reached in the study. 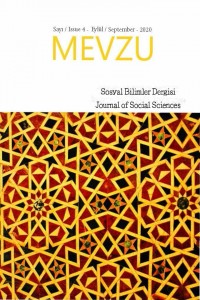