Evaluation of Inflammation in the Carpal Tunnel Syndrome by the Neutrophil-Lymphocyte Rate, Platelet- Lymphocyte Rate and Mena Platelet Volume

Objective: Carpal tunnel syndrome is the most common form of mononeuropathy caused by compression of the median nerve at the carpal tunnel level. The physiopathological mechanism of this picture, which is mostly idiopathic, is still not fully explained. In this study, we aimed to examine the possible role of inflammation in carpal tunnel syndrome with neutrophil-lymphocyte ratio, platelet-lymphocyte ratio and mean platelet volume values. Materials and Methods: A total of 55 patients, aged between 20 and 60 years, referred to our electrophysiology laboratory and diagnosed with carpal tunnel syndrome according to the American Academy of Neurology criteria and 36 healthy participants were included in the study. Patients were divided into three subgroups as mild, moderate and severe according to electrophysiological findings. Clinical functional status and disease severity of patients were evaluated with Boston Questionnaire. Results: A total of 91 people, 71 women (78.02%) and 20 men (21.98%), were included in the study. The patient group consists of 43 women and 12 men, with an average age of 50.04 ± 9.78. The control group consists of 28 women and 8 men with an average age of 49.92 ± 7.59. When compared between patient and control groups, no significant difference was found between neutrophil-lymphocyte ratio, platelet-lymphocyte ratio and mean platelet volüme values. When the measured values were compared in the patient subgroups, there was no significant difference between disease severity and values. Conclusions: The role of systemic inflammation in carpal tunnel syndrome physiopathology is uncertain, it seems plausible that some mechanical and local pathologies should be considered in the foreground to elucidate the etiopathogenesis. We believe that high number of patients, multicenter and longitudinal studies are needed. 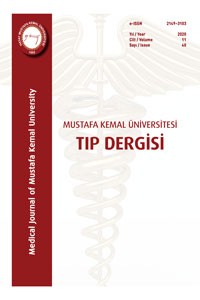