Being one of the most important figures among the wahdat al-wujûd(oneness of the being) theoreticians, Qunawi paid a significant attention to the Divine Names, like his predecessor ibn Arabî. Unlike the authors of classical period of su fism, Qunawi tackled the issue of Divine Names not only with regard to the Dhikr/rememberance/repitition of the divine names but also to ontological concerns. He placed the Divine Names in a central position while describing his Sufistic ontology. According to him, the first things manifested/disclosured from the God are His names and attributes. Everything in the physical world is the self-disclosure of a divine name, or the loci of manifestation/madhar of that name. These divine names have got such an eminent position in Qunawi's ideas that it is almost possible to consider his reflections on the divine names paramount to his ontological views. From the point of view that Qunawi's ontology is mainly based on Divine Names, an outline of his reflections on divine names has been introduced in this study. 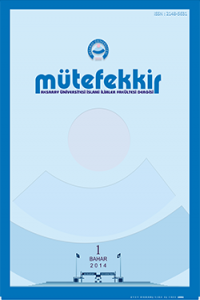