The Concept of “co-working” and Office Cafe

Office architecture has undergone a series of transformations over time with the changes to technology, living conditions, power elements, working patterns and many other things. At the beginning of the 21st century, due to new job descriptions, there was a tendency to 'work whenever and wherever you want' and brought, an office concept independent from the institution, to the agenda. The concept of “co-working” as a new generation of work which allows individuals who share a common place to work in unspecific times and time periods, has been heavily adopted by independent workers. As a result of this tendency, informal working spaces have been diversified by spreading to public areas where mass use takes place at various levels. In this study, firstly the emergence and development of the “co-working” phenomenon was mentioned, and the "study in the cafe" phenomenon commonly observed in the central districts of Istanbul such as Kadıköy and Karaköy was evaluated in certain places. The informal work areas found in cafes were examined through user profiles, user needs, preference reasons, architectural designs and usage patterns by using observation, interview and questionnaire methods and some results and suggestions were given. 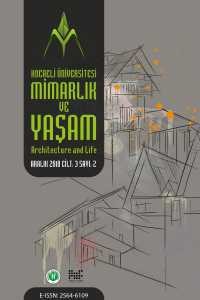