The Implementation of Grounded Theory Approach in Management Research

It is important to study qualitative research, which can be expressed as the reflection of post-modern philosophy on methodology and has been rapidly spreading in Turkey especially in recent years. Due to the diversity of philosophies it adopts each qualitative research approach requires a stance. Grounded theory started to be adopted as a qualitative method in Turkish academia after 2013. Although it is not a method commonly used in qualitative research studies in the field of management and organization, this approach has been used in the United States since 1970. It is thought that the main reason for this is the researcher paradigm, as researcher paradigm has a profound effect on research methodology (Rahmani & Leifels, 2018).

In order to understand the process of the emergence of new researcher paradigms, and to help contribute to the foundation of the qualitative research paradigm emerging in Turkey in recent years, the paper undertakes a literature survey regarding the emergence of the grounded theory approach, its basic philosophy, processes and codes of practice. Subsequent to this step, in terms of its use in management research, the literature regarding the suitability of the approach for use in applied studies such as management is considered. Following this, the use of grounded theory in management research in Turkey are given. In the researchs examined, it has been found that grounded theory approach has been mostly used as data analysis strategy and frequently referred to Strauss and Corbin.

Following the publication of Barney Glaser and Anselm Strauss’s prominent work in medical sociology “The Discovery of Grounded Theory”, grounded theory, which came into being in the mid-1960s, has been interpreted hetrogenously by different researchers, resulting in variations in its practice over time. In Turkey, grounded theory is generally understood as a technique used to carry out studies. However, this paper has operated with the conviction that qualitative methods are a philosophical stance and that grounded theory is a paradigm.

Efforts to formulate a theory in the fields of management and organization mainly include issues such as socialization, decision-making, change and leadership. In addition, interactions that occur at the individual, group and organization levels, as well as informal behaviors embedded in formal organizations are some of the subjects of research considered in this field. Grounded theory thus seems to be quite suitable for studies conducted around the issues of the legacy of interactionism and complex management and organization. The main problems faced here are the lack of researcher profiles, and awareness of why and how the approach to be adopted should be applied.

To determine the operational status of the grounded theory approach in management research in Turkey, “gömülü teori,” “grounded theory” and “temellendirilmiş kuram” were utilised as keywords in searching ULAKBIM Kesif, Google Scholar, TR Index and Journal Parks search engines as a basis for the literature review. This screening process revealed that grounded theory is more widely used in the field of psychology and education, in comparison to other fields in Turkey. However, although the grounded theory approach has been used in some studies in management and organization, the approach has not been implemented satisfactorily, in terms of the afore mentioned points. Some of the papers merely mention the term “grounded theory” in their keywords, but there is no use of grounded theory methodology in the studies. In the researches examined in this study found that content analyses, case studies and phenomenology have also been used in conjunction with the grounded theory. Within these studies, although not all of the researchers indicated which grounded theory approach they adopted, all of them made references to Strauss and Corbin. Three of the eight studies examined were studies produced from dissertations. The significant finding here, which is thought to be originated from the doctoral education process, is that the approach is used more effectively in the studies conducted at the level of doctoral dissertation. This would suggest that future studies will likely be conducted in accordance with the research paradigm.

Grounded theory is not an analytical approach to be applied so as to obtain methodological legitimacy. Nor is it a routine data analysis technique. It is a stance and a research philosophy. It is worth re-iterating the fact that there are many risks (such as inability to achieve purpose, mistake in the collection and evaluation of data) awaiting researchers who are considering using grounded theory from now on in their studies. Instead of revering any specific methodology, it is essential to adopt the appropriate method and technique for the purpose of the research. The grounded theory approach can be recommended to researchers working in the field of management in Turkey, as it is suitable for interactive areas. However, before all else, the approach must ontologically, epistemologically and methodologically be understood. For this purpose, especially at the doctoral level, philosophy of science and qualitative research approaches should be taught together with research methods and techniques. 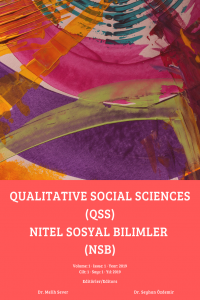