In this study, it is focused on the effect of Japanese painting art that roots in the past on West painting art. After limited relations with outer world for 250 years, Japan started trade relations with West in the middle of the 18th century. As a result of these relations, exotic products and print makings belong to Japan were carried to Europe via western traders. These products were met with great pleasure by large mass mainly art lovers. This affect was called ‘Japanism’. In the same years, having a stable process some impressionist artists started to collect wooden printmaking in order to make a collection, as those wooden stuff was cheap and easy to access. The artists, studied on these pictures and admired them and they gained new points of view. Many painters, especially in the impressionist movement and post-impressionist period, were directly or indirectly influenced by Japanese art. One of those artist is James Tissot who had previously some Neo classic studies. Tissot learned about Japon estamps thanks to his close friend Edgar Degas and get affected by them. Also, Tissot himself had a collection consist a large amount of Japon objects. The aim of the study is to reveal the impact of Japanism in James Tissot’s works, after doing literature review. The study was limited with examples of Tissot’s Japonism oriented works in terms of topic, composition, colour and form. In this study, qualitative research method - work analysis is applied and literature review method is used 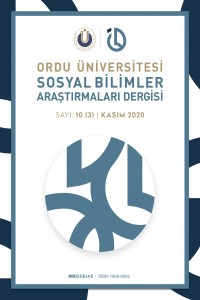