This study, supported by the Southern Forestry Research Institute (Elazığ) of the General Directorate of Forestry (GDF) with project number 24.4101, has been performed in oak forests of Gözeli village, Sivrice county, Elazığ Province within the areas of the Elazığ Regional Forestry Directorate between 2009 to 2013 years, aimed at finding out the bird species and their breeding activities in the nest-boxes with different sizes, colors and positioned at different slopes placed by the research team. Within the all successful breeding birds only Scops Owl (Otus scops) has preferred big sized nest-boxes, whereas other species has used both small and big nest-boxes. The most preferred size of each species is as, Great tit (Parus major) used 66,4% and Rock sparrow (Petronia petronia) used 15,2% of all small nest-boxes, Blue tit (Cyanistes caeruleus) used 16,3%, Nuthatch (Sitta europaea) used 23,2%, House sparrow (Passer domesticus) used 27,9% and Otus scops used 7% of all the big nest-boxes.

It has been find out that nest-boxes’ sizes, colors and positions at slopes has differed in selection of nest-boxes among the bird species. At the sites with high density of a species, there should be mostly the most preferred nest-boxes in size and colors should be positioned at the location to increase the breeding bird numbers and to be more efficient in biological controls of forests. 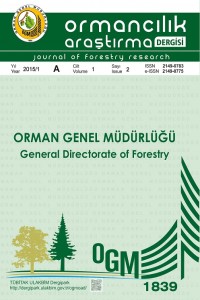