Evaluation of the history of industrial plantation in Turkey

One of the important components of the forestry sector is forest industry organizations. The raw material requirement of these organizations is one of the important fields of activity of the sector. Therefore, special effort has been initiated since the 1960s in order to meet the increasing raw material needs with the proliferation and growth of forest industry organization in Turkey. These efforts, which started with the establishment of the Poplar Research Institute in İzmit, continued with introducing of some fast-growing species tree species, establishment of research trials and plot applications. Later, the subject was analyzed in depth with scientific meetings held in 1971, 1982, 1998 and 2003, and serious decisions were taken regarding the initiation of industrial afforestation, but these decisions could not be fully implemented until 2012. The most important implementation on the subject was implemented with the “Industrial Afforestation Works Action Plan” covering the period 2013-2023, prepared by the General Directorate of Forestry. However, there are still problems in this regard, especially arising from lack of awareness. With this study, the process experienced in industrial afforestation works in Turkey was evaluated and suggestions regarding the existing problems were developed. 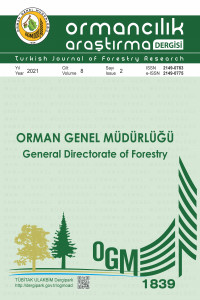