Two Faces of Negative Construction of Islam in the European Society: Orientalism and Radical Islamist Ideology

The existence of a negative image of Islam in European society is a social phenomenon that goes back to the beginning of the 8th century. In the Middle Ages, the image of Islam, which is considered as a negative discourse dominated by religious concepts, has taken shape a positivist and Eurocentric perspective after the Enlightenment. It is seen that this negative image of Islam has been shaped by violence, terrorism, cultural conflict and fundamentalist ideologies in the process from the last quarter of the 20th century to the present. In this study, it is aimed to analyze the similarity between the negative image of Islam produced in European society and the Islamic image produced by Islamic fundamentalist ideologies. In this study, the features and content of the negative image of Islam produced by the orientalist point of view in European society are emphasized. Subsequently, the Islamic image, envisaged by the radical and fundamentalist Islamic ideology that began to take root in Islamic societies, was tried to be elucidated. As a result of the study, it has been concluded that the images of Islam produced by both ideologies, which can be defined as opposite, are similar in content and scope. Both ideologies were tried to homogenize Islam in a negative and reactionary format. 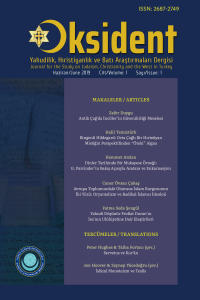