Aridisols, which are widely distributed in the South East Anatolia Region in TURKEY and are also called as arid region soils, it also occupies an important place among the soil classes in the Central Anatolian Region, when soil characteristics and long term average climate data are evaluated according to Newhall model. In this study, the general characteristics of the territories belonging to the Aridisol ordinance, which is defined as the result of a detailed soil survey study on the area of Beşgözler in the size of 5140 hectares in the Konya plain. The land was evaluated parametrically according to the FAO Soil Productivity Index and mapped in the GIS environment. In the results of study, 1950 hectares are identified in Aridisol order from 2 different series according to soil taxonomies and the soil was classified as Typic Haplocalcids in the subsoil group. According to the results of suitability classifications with FAO Soil Productivity Index was determined that the Aridisols of the region have been distributed as 60.50% for class II (S2) good quality, 39.32% for class III (S3) medium quality and 0.18% for class IV (S4) poor agricultural land. Also, the results it was concluded that these areas are the absolute agricultural land, in addition, in these areas for wheat or barley with profitability under dry conditions, furthermore, the areas are suitable for sugar beet, sunflower, corn or bean under irrigation conditions.

European Journal of Science and Technology 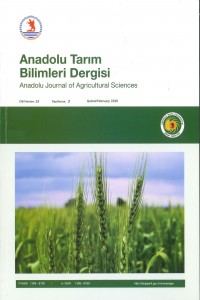