Objective: Heart type fatty acid binding protein (H-FABP) is a low moleculer weight major cytoplasmic protein and released quickly from cardiomyocytes in response to myocardial injury. We searched functionality of H-FABP in diagnosis of acute coronary syndrome (ACS) and prevalence of coronary artery disease, relationship with its severity and early diagnosis.
Materials and Methods: This was a prospective observational study. We took in 110 patients- aged 18 and above-diagnosed ACS between the dates February 2016 and January 2017. The patient population was divided into two groups as ST segment elevation ACS (STEMI, 52 patients) and Non-ST segment elevation ACS (NSTE-ACS, 58 patients). For H-FABP and cardiac troponin I (cTnI) blood samples of the patients were taken both when they first applied to the hospital and six hours later. Coronary angiography was performed to all the patients.
Results: On admission, it wasn’t found a statistically significant relationship in both groups, GRACE (Global Registry of Acute Coronary Events), SYNTAX (The synergy between percutaneous coronary intervention with taxus and cardiac surgery) and between Gensini Risk skores (p=0.056, p=0.791, p=0.278). The H-FABP level of blood samples looked over six hours later with GRACE and Gensini risk scores were statistically significant in the H-FABP positive group (p=0.003, p=0.011). However SYNTAX risk score in H-FABP positive group was not statistically significant (p=0.984).
Conclusion: In our study, we demonstrated the relationship between H-FABP and coronary artery disease risk scores and that H-FABP can be used in the diagnosis of ACS. 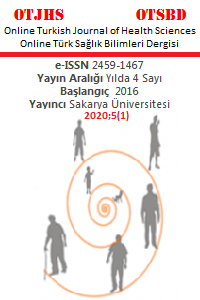