Finding Main Idea: What Do Teachers and Students Do? Why Do They Have Difficulties?

The purpose of this research is to examine secondary school students’ competencies of finding the main idea and to reveal the student and teacher experiences related to this competency. In this study, which is based on the qualitative approach, a case study was used. The study was conducted with secondary school students (5, 6, 7 and 8th graders) studying in a secondary school in the Eastern Black Sea Region and their Turkish teachers. While determining the participants of the research, the outlier and criterion sampling method were used. As data collection tools, informative and narrative reading texts, observation forms, student and teacher interview forms were used in this study. Descriptive analysis and content analysis were used in the analysis of the data. In line with the findings, it was concluded that students at all grade levels had difficulty in finding the main idea; however, it was seen that as the grade level increased, the level of success also increased. In addition, it was concluded that the students at all grade levels could not express the main idea fully and clearly by supporting it from the text, they generally described the topic and the event in the text, they either gave reader-centered answers reflecting their personal reactions or summarizing the text when the main idea was asked. Findings from the interviews have shown that students experience text-based, affective-based and expression-related problems, while teachers describe these problems as instructional, student-based and text-based difficulties. Students stated that they were affected by the type, difficulty and length of the text, and that they had difficulty in forming a main idea sentence along with experiencing anxiety, fear and stress in this process. Teachers also stated that teaching the competency of finding the main idea was a problem for them, that all students had difficulty in finding the main idea, that they lacked knowledge about the teaching of this skill, that they could not spare enough time, and that the texts and activities in the textbooks made this process even more difficult. Moreover, it has been determined that both teachers and students have misconceptions related to this skill. 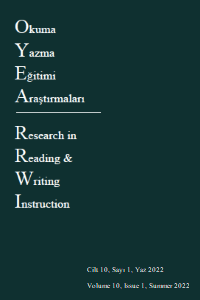