As a much-discussed part of the human mind, memory today is an interdisciplinary subject studied by a variety of academic fields such as psychology, sociology, psychiatry, cultural studies and literature. In British drama, it finds a reflection with the term “memory plays” whose representative playwright in the twentieth century is Harold Pinter. On the other hand, it can be observed that Anthony Neilson, emerging as a voice of the British In-Yer-Face drama of the 1990s, makes an emphatic use of memory in his plays like his predecessor. In this sense, this paper argues that Anthony Neilson’s play writing shows resemblances to Harold Pinter’s, which is acknowledged as the Pinteresque, that, more specifically, Pinter’s Old Times (1971) and Neilson’s Penetrator (1993) share much in their use of memory, and analyses the particularities each playwright employs in their utilisation of this concept within their plays.

THE PINTERESQUE ELEMENTS IN KAZUO ISHIGURO'S “A FAMILY SUPPER” 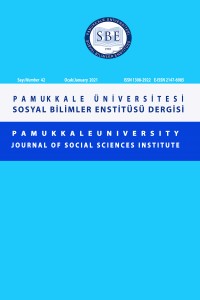