In the Kurdish Classical literature, the first to own cursing work (le‘netname) is Şêx ‘Ebdurrehmanê Aqtepî (1853-1907). This work resembles elegy in terms of the content, however, the poet named it as "recmiyye". It looks more than a cursing book, therefore we named it as the cursing book. Before Aqtepî, on the event of Kerbela, no examples of cursing work had been noticed. the content of the poetry is based on the Kerbela event in which the grand children of the Hz.Prophet (s.x.l.) Yez'îd, the son of the Mua'awiyye had been massacred by the order of the Sultan of the Emewwi,  this event has been the content of the many poems in the form of Mersiyye. However, this poem is particularly focused on cursing Yezîd and his comrades. Consequently, the name suits its name due to its content. This poem exists in Şêx ‘Ebdurrehmanê Aqtepî diwan and it was classified by his son Şêx Mihemed Kerbelayî. In this article, we have highlighted the life of the poet and the poem itself. Followingly, we turned our gaze into this type of cursing work in the Kurdish literature and  such questions as whay have we named these poems as elegy and its related questions with its results. Afterwards, we have noted down the result of the research, its importance in this type of the Kurdish Literature. However, we transcriptisized the peom manuscript into latin alphabet and we prepared a detailed small dictionary. ın the appendix, we appended the original version of the poem. 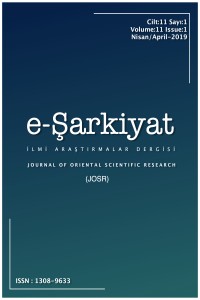