İhsan Sureyya Sırma was born in 1944. He is from Xesxêr, Siirt. He is a theologian and a traveller. He has got gotten many works. The subject of his works is generaly onto Islam History and a few of his products are accepted as literary works. He has produced some travel books as well. After he completed his doctorate programme in Paris, he returned to Turkey. After that he has been known very well around the world, especially in Arabia geography and Europe. Many people have been affected by his works. Although he is not a literature man, he has written some literary books which are poetry and memory and essays. He is originally a kurd and his native language is kurdish, however he has not written anything in kurdish. He has written his books in turkish. Sen Geldin is the only one of his books that has been translated into kurdish by himself till now. Its language has got a certain fluency. He has used turkish in a very good way. Not only he knows kurdish and turkish, but also he konws french and arabic. The most dominant aspect of him is that he has got deep knowledge on both Eastern and Europe. In this article, İhsan Sureyya Sırma’s life and his works have been introduced and his literary personality has been especially evaluated. 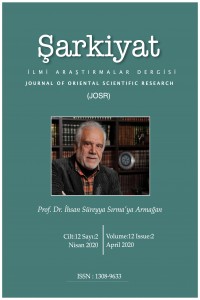