PLANNING AND BUDGETING RELATIONSHIP AT THE CENTRAL LEVEL: AN ANALYSIS OF THE CHINESE EXPERIENCE

The policies implemented by China, which has declared that it has adopted a free market economy since 1978 and aimed to realize a decentralized management system, is the subject of increasing interest in the literature. Planning and budgeting are the primary tools of these policies. In this study, which analyzes the relationship between planning and budgeting in the context of central government and local governments in China, it is tried to reveal how the financial resources and responsibilities are shaped within the framework of planning by examining the official documents and data about the Chinese public finance. It is concluded that the data do not support the issues emphasized in official documents and plans, the central financial structure has not been abandoned and in some cases it has been strengthened, local governments are obliged to comply with central planning, and transfers from central government to local governments revitalize the centralized structure. 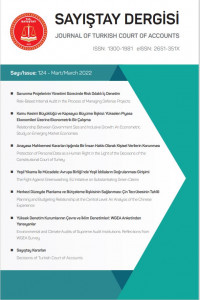