Regarding to the Classical Islam conception, the essence and the natural disposition of humanity have been examined within the framework of the concept of "nafs". In this context, another format of the question "What is human?" is undoubted, "What is the nafs?”. Yet, the nafs concept is described as "the essence and truth of human". The nafs theory which is taken from the ancient thoughts has been met kind reception by Muslim scholars; it has been criticized and interpreted to a certain extent to suit the spirit of the religious texts. Although sciences such as philosophy, mysticism, and theology have approached the nafs theory in different ways, they have presented close and complementary views at the point of “forces of the nafs”. According to this theory which has put into final form by Muslim scholars, human consists of four different forces, namely “sahvani/bahîmî, gadabî/sabuî, vahmî/shaytanî and aqilî/malakî”. The characteristics among the aforementioned powers which make people human beings, are thought to be the aqilî/malakî force and it is envisaged that human is obliged to activate and develop this potential. Therefore, the principal answer to the question “What is human and nafs?” is “aqilî/malakî force”. In the face of this force, vahmî/shaytanî force is placed. Those who are excluded from these two forces, sahvani/bahîmî, gadabî/sabuî forces, are considered to be neutral. The first is that human survival; the other is characterized as the forces given to defend himself and save him from extinction. When we look at the main reasons for the frequent and intensive study of the concept of nafs, we see that many reasons have propounded such as; the ways which human reach happiness, determining the necessary criteria to be virtuous and determining the best/upper virtue, essence and determining the purpose of natural disposition based on the essence. 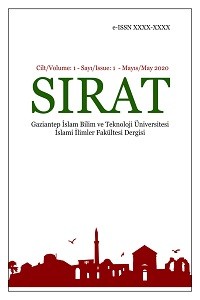