Sociologist, political scientist, economist, social historian and historical social scientist are some of the titles that are used to introduce Immanuel Wallerstein. Among these titles, the one that Wallerstein favors the most is “historical social scientist”. The reason he describes himself as a historical social scientist in spite of the formation of sociology in his intellectual development is his work of Modern World-System with the first volume published in 1974. In this work of his which is a classic of the modern age, he not only tells the story of the Western Civilization's expansion since the 16th century, but he also suggests a new perspective to analyze social change by opposing the categorizations related to modern social sciences peculiar to the 19th century. With his analysis named world-system analysis, he is now one of the representatives of historical sociology in the related literature. This description in regard to Wallerstein’s fields of interest and profession was made in a period which includes the social transformation in the USA. In this period, his comprehension of sociology took a new form, especially as a result of the way he related his work to history, and determined the contents of his works in the coming years. In this regard, the way and the conditions under which Wallerstein, as a scholar educated in the American tradition of sociology, inclined to historical analysis and the significance of this inclination in American sociology is the subject matter of this article. 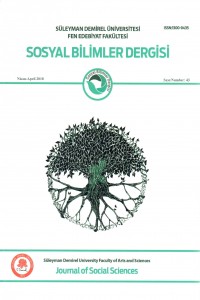