The Jinn, which is regarded as the third kind of entity apart from the angel and the human being, has been the subject matter of several separate works written by both Muslims and non-Muslims in the past and present. In short, such works deal with the nature of jinns and their characteristics, and they cover matters such as the beliefs about jinns in several religions and cultures and their relationship with human beings. Apart from the fact that the primary source of Islam, namely, the Quran, has a separate chapter called al-Jinn (The Jinn) /72, it provides information about jinns in many verses in several other chapters. Traditions also provide plenty of information about jinns. One example of such information is on the question whether the Holy Prophet have met with jinns. A study of the traditions on this matter reveals the fact that there are ṣaḥīḥ (authentic) traditions that appear to be in conflict with each other and/or with some of the verses in the Quran. In this paper, we have analyzed and evaluated the relevant traditions in order to reconcile these contradictions, thus we aimed to clarify the matter. The question on whether the Holy Prophet met with jinns is often discussed within the context of narrations coming from Ibn al-Masʿūd and Ibn ʿAbbās. While the traditions coming from Ibn al-Masʿūd indicate that the Prophet met with jinns, a tradition narrated by Ibn ʿAbbās says the opposite. In the present work, we have analyzed the outwardly conflicting traditions narrated by both companions along with traditions narrated by other companions on this matter in the light of the chronology of the revelation of the Quran. As a result, we have concluded that the Holy Prophet have met with jinns as narrated by Ibn al-Masʿūd and that the report narrated by Ibn ʿAbbās was about the first years of Islam. 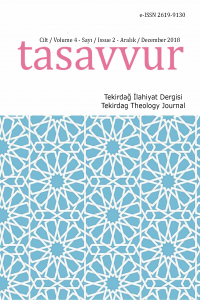