Migration from rural to urban areas has increased due to industrialization in our country since the 1950s. The increasing population in cities has increased the need for housing problem and housing as well as cultural, social, economic and environmental problems. In order to solve this problem, people have tried to solve their housing needs by making unplanned or non-formal informal structures. In this case, squatters contrary to the zoning legislation, illegal construction and the irregular and unhealthy urbanization that created the problems of ownership has resulted. The Law No. 7143 on restructuring of taxes and other receivables and amending some laws was enacted on 18.05.2018 with the Official Gazette No. 30425 named ‘zoning peace law’ which is applied for the solution of the mentioned problems. In this study, a research has been made on the extent to which Kayseri province and its districts have benefited from Article 16 of this Law and for what reasons they have applied. It has been made thematic mapping with the help of Geographical Information System (GIS) by examining illegal construction rate, types of usage and reasons of contradictions in city and district centers in zoning and urbanism. As a result, planning problems arising from the applications of zoning peace of Kayseri, which is a metropolitan status, have been put forward and solutions have been developed. 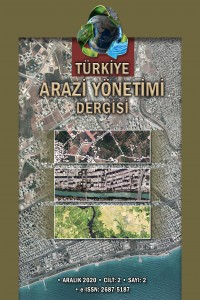