THE GEOGRAPHICAL AND POLITICAL BORDERS OF AHLAT IN THE XII-XIII. CENTURY

Although Ahlat, located in the Eastern Anatolia Region, has a mountainous and harsh climate due to its geographical location, it has been of strategic importance due to factors such as being at the crossroads of transportation roads since ancient times. After the Urartians, who are known as the founders of the city, Ahlat has been used as a permanent settlement by many states and tribes. Undoubtedly, Ahlat's geographical location, fertile lands and abundant water resources are among the important reasons for this. The city has a very important place in our history as it is the entrance gate of the Turks to Anatolia. Ahlat, which was the capital of the Sokmanids (Ahlathsahs) principality in the XII. century, was the most prosperous in terms of politics and trade. During the rule of this principality for more than a century, it is extremely remarkable that the political borders of Ahlat expanded to the level of a country. The eastern branch of Ayyubids put an end to the Sokmanids dynasty, which could not be managed by long-lasting throne fights and experienced statesmen. Ayyubids also extended the political borders of the city to a very wide area. In this study, by drawing attention to the strategic importance of the geographical position of Ahlat in the Medieval, its political borders will be shown on the map. In addition, other settlements such as cities, towns and castles connected to Ahlat in the XII and XIII. centuries will be indicated on the map in the direction indicated by the Medieval sources. 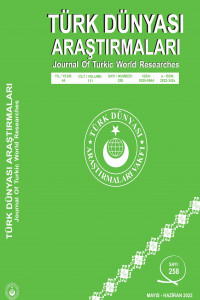