The Role of Tourism in Development of Azerbaijan Economy: Implementation of Turkey Experience

Aim: In the modern world, tourism is one of the dynamic and rapidly developing sector. The Republic of Azerbaijan benefits from the developments of tourism and the importance of tourism is increasing day by day. After the oil sector, the sector that Azerbaijan has focused its attention the most is tourism, the declaration of 2011 as the "Tourism Year" is an indication of this. Tourism oriented policies and supports have been developed in Azerbaijan. Despite all the efforts, the economic development targets have not been fully realized. It is aimed to determine the tourism potential of Azerbaijan and to develop strategies by examining the current situation of tourism. It has been prioritized to identify the state mechanisms for the development of tourism and the problems that arise. Azerbaijan attaches importance to optimal policies of tourism oriented countries in order to develop tourism. Turkey is the country closest to Azerbaijan both economically, culturally and politically and has tourism experience since 1980. Policy recommendations regarding Azerbaijan tourism have been tried to be formed within the framework of Turkey's tourism experience. Method: Using a descriptive research method, a SWOT analysis was made on the strengthening of Azerbaijan tourism and policy proposals were discussed within the framework of Turkey's experience. Comparative research, one of the descriptive research types, was applied. Findings: As a result of the study, it was determined that tourism sector has a driving force potential for the economy of Azerbaijan. It is presented as a study proposal that practices similar to the policies in Turkey's tourism development process can also be effective for Azerbaijan. In addition, ending the war situations and develop international cooperation have been identified as other priority issues for tourism development. Discussion: Despite all its positive reflections, the fact that tourism is frequently affected by external factors should not be ignored. Political issues and health problems such as the Covid 19 pandemic are among the important problems of all countries as much as Azerbaijan. For minimizing these negative effects, it is presented as a study proposal that focusing on the optimization of tourism-oriented policies 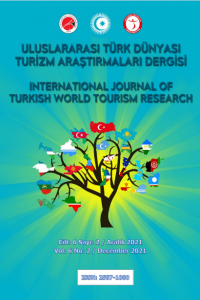