Updating the Religious Decree: It's Scope, Possibility and Reasons

Since it depends on the orders and specifications of Allah Almighty, the issue of updating religious decrees and fiqh that consists of collection of decrees should be handled carefully due to its academic and emotional dimensions. Along with the two troubled approaches on this issue, one of which can be considered as negligence (tafrit) and the other extremeness (Ifrat), there is a third approach proposing a more balanced theory of change in a methodical framework. The negligence (tafrit) approach, which defends that the religious decrees will never change, regards the classical fiqh doctrine as a collection of decisions that puts an end to the issue. According to the extremeness approach, which opposes this, all religious-legal decrees, including those directly in the Quran and Sunnah, are conditional to the historical and social conditions in which they were produced. Therefore, these decrees should also change in parallel with the changes in society and conditions. According to the third approach, which is more balanced and methodologically more consistent, legal decrees, except in the matters where change is not possible in principle, may be subject to change in terms of their bases and purposes. In this article some determinations will be made around this last approach. 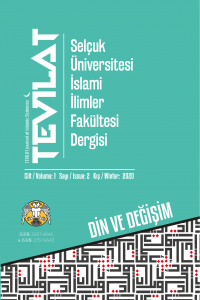