In the modern age, problems are solved with the help of human skills such as reasoning rather than divine help. In this context, deism, which is based on rejecting divine revelation and accepting a being that can only be grasped by the mind, has begun to seem reasonable to many people. It has also become popular to use the word superstition when referring to religious beliefs and practices that are supposed to lack any rational basis. In deism, where the existence and power of God is accepted, man is not held responsible for religious obligations, namely worship. Against deistic claims, it is necessary to prove the reality and necessity of revelation through social needs, the founding elements of civilization, the guides that can lead people to the right thought, namely the prophets. In this respect, the attempt to explain the innovative views and defense of revelation/prophecy of the modernist Muslim thinker Muhammed Abduh (1849-1905) by taking into account the concepts and understanding of the modern world is very important. Since deism is the popular belief structure of the modern age, the method of defending the Islamic revelation against it must be in accordance with the modern point of view. In this context, Abduh's views in search of solutions to modern religious problems are guiding in terms of updating the proof of revelation. 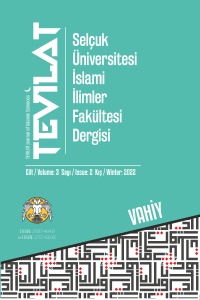