Recent Deformation of the Western Anatolia Tectonic Wedge: Block Motions Caused by Escape to the West

All research on neotectonics in Turkey accepts Western Anatolia as a distinct, separate region in which the neotectonic period began in Upper Oligocene, according to some researchers, and in Upper Miocene according to others, and has continued up to the present day. The region expanded in a north-south direction during this process grabens were formed, generally with an east-west orientation.

In this interpretation, the normal faults causing a north-south oriented extension are proposed to have detachment fault characteristics. As observed in field studies, fold and strike-slip faults developed during this period but the sedimentary basin geometry and dimensions cannot be explained by a simple graben system. There are outliers in terms of the chemistry of volcanism in outcropping areas. Explanations for these inconsistencies have yet to be found and those based on time-space-causal relationships related to evolution in the neotectonic period do not go beyond abstract modelling.

In this presentation, a different model is suggested with the aim of solving controversies in the models proposed to date. The recommended method is based on the neotectonic evolution explanatory principle of revealing the current deformation form in a region in order to understand its neotectonics, and then working backwards from today.

Currently, the tectonic region defined as Western Anatolia encompasses an area between the northwest-southeast oriented Bursa-Eskişehir-Afyon Fault Zone and the northeast-southwest oriented Muğla-Afyon Fault Zone in the east, extending in a sideways V shape towards the west. Moving toward the west, the region is separated into intraplate blocks due to the lithological differences, paleotectonic structures and volcanism, etc. present in the region. The different movement velocities of these separate blocks cause deformation in the region. Significant factors affecting these motions are the dimensions, velocity and direction of the blocks. With the varying motion of the blocks, normal, reverse and strike-slip faults along with extensional fractures occur along the block boundaries. In this model, different movements may be observed in different locations on the same fault plane. Again, there are parallel, coeval structures found in the region, although they move in different directions. On the whole, block movements progress toward the west-southwest of the region. Extensions occurring between blocks occasionally form graben geometry.

According to this proposed model, the east-west oriented grabens currently observed in Western Anatolia are concluded not to be products of north-south oriented extensions. Currently, the greatest extension is on the eastern boundaries of the V-shaped block. Intensive thermal manifestations are observed north of this boundary in the Kula Volcanics and to the south in the Pamukkale region. The 10-km long fracture caused by the 1995 Dinar Earthquake and the aseismic deformation motion at Sarıgöl both have extensional fracture characteristics.

Paleomagnetism, crustal thickness, GPS data and the fault-plane solutions of earthquakes in the region support this model. This proposed kinematic model is thought to have been in operation about 3-4 million years before the present. 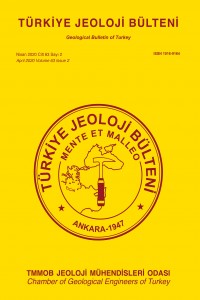