In this study, the religious social perceptions and friendship relations of Turkish-German Muslim children between the ages of 7-14 about their religious groups and their host Christian peers were examined. 42 students, including 17 girls and 25 boys, participated in the study. Here children's drawings were benefited as a primary source of information and a diagnostic method in which secondary information (open-ended questions) were directed. The data were analyzed by descriptive qualitative analysis method based on the research questions. In this study, it was seen that religious indicators, signs, and symbols (religious-social images) emerged effectively through the drawing method. Theological semiotic may be used as a diagnostics method in more studies in determining the development of religious concepts in children. The number of religious differences in the drawings increased with age. It was understood that 9-14-year-old children could make religious categorization in interviews about drawings and responses concerning open-ended questions. In-group favoritism and in-group friendship preferences increased with age. At the same time, as age increased, moral reasoning in choosing friendship increased. 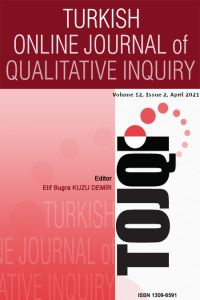