The Early Bronze Age III is known as a period during which important changes had occurred in Anato-lia. The reflections of the changing socio-economic life in this period are first perceived in pottery. Troy, Küllüoba and Beycesultan in Western Anatolia have contributed importantly to the understand-ing of the period, as they all have a long chronology. On the other hand, the data obtained from the excavations relevant to the period are still insufficient. Besides, the Early Bronze Age III has been sparsely determined in the surveys performed throughout Western Anatolia. For this reason, there is an important deficiency. In this study, the materials recovered in the surveys of Eskişehir, Kütahya and Bilecik Provinces conducted by Prof. Dr. Turan Efe between the years of 1986 and 1994, which have been classified by him and which pertain to the Early Bronze Age III have been evaluated in order to make up that deficiency. In addition, when the materials are evaluated, the data obtained in the Excava-tion of Eskişehir/ Seyitgazi Küllüoba are particularly taken into consideration, and the chrono-typology established here is taken as a basis. Consequently, the general view of the region in the relevant period is presented in detail. 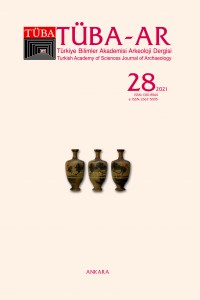