Purpose and Importance: In this study, we aimed to create a new cultural route in order to provide tourism diversity in the region.

Methodology: In this study, the Sheikh Shaban-i Veli cultural route was created by using spatial technologies such as GPS and orthophoto maps. We created a 3D digital land model of Kastamonu province and its environs by using the district-owned satellite images, vector maps, orthophoto maps, digital elevation models of Turkey.

Findings: The Sheikh Shaban-i Route is a complement to the Sufi Trail, both as content and a destination. The problems encountered during the formation of the Sheikh Shaban-i Veli route are the lack of restoration, written or visual materials, sign, camping places. this study, the route’s coordinates were determined, and the route planning was done.

Originality/Value: Shaban-i Veli route can then be used as a development tool for marginal or rural areas. 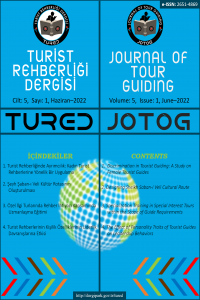