A Reformist of Armenian Origin During the Turkish Qajar Dynasty; Mirza Malkum Khan

Mirza Malkum Khan (1833-1908),one of the most eminent intellectual of Iran during 19 th siecle, was educated for many years and witnessed social and political decelopments closely in Europe. He wrote many treatises to guide the goverment of that time after he had returned to his homeland. In these treatises, he offered solutions about the way and the source of existing reform ideas in Iran. Malkum Khan, born in a Armanian family, returned to homeeland after his education period in Europe and was notified swiftly significant promotions in goverment whit the title of “Mirza, Prens, Nazım’ud-devle” during Qajar dynasty. He published many treatises on military, economic, law an social issues under the effect of his own impressions he got from Ottoman Empire and Europe. He became the first man who brings and operates telegraph in Iran. In addition, He established the Masonic Organisation “feramushhane, feramason” and trigerred the first reformist activities in Iran. He was also the first person claiming “Tanzimat” concept with the inspiration of “the renovation era of Ottoman Empire” in Iran. In all his life, Malkum Khan lived and was seen like a Muslim and had intellectual conflicts with the Shia clergy of his own era. In this article, we have examined the life and political personelity of one of the most important political actors, Malkum Khan who guided the Iranian Instutional Movement in 1906. We believe that our study is beneficial to understand reformist movements in Iran. 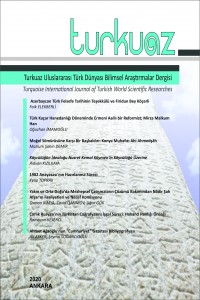