The subject of meaning is a wide-ranging topic that many researchers emphasize. Various classifications have emerged due to the different perspectives of semantic scientists doing research on the subject. Each semantic scientist made his own definition of "meaning" and made evaluations accordingly. Synonymous status; In general, it was tried to be explained with words with different spelling but same meanings. While some semantics argue about existence of synonymity in Turkish language, there is also an opinion that it finds a place in the language depending on various conditions. These different perspectives naturally brought different classifications. Inverse meaning situation; it is provided by the contrast that exists between the two elements. Compared to synonyms, the concept of inverse meaning is home to more common views. The commonality here is the one formed about the existence and meaning of the inverses. In addition, different classifications are just like the classifications for synonyms made for inverse meanings.
When we consider the synonymity and inversiveness in terms of plant names, we can say that there are a few important points to be emphasized. When we evaluate the plant names under the title of synonyms, the most important situation that emerges is the situation of correctly determining the synonymous plant names. While the synonyms of plant names quoted from different languages can be determined more clearly, this determination may not be very clear in synonymous plant names that exist in the same language. Mouth features are also very effective in the emergence of this situation. The changes that occur due to the mouth features sometimes cause confusion. The same reason manifests itself in the compilation of plant names. When plant names are evaluated in terms of reverse meaning, there is a clearer line than synonyms . The reason for this clarity is due to the fact that the contrast can only be achieved with opposite words. In our study, we will include a list of synonymous plant names and inverse plant names obtained from various sources. With these lists, which are a small indicator of how rich vocabulary the Turkish language has, we will try to shed light on synonyms and inversiveness. 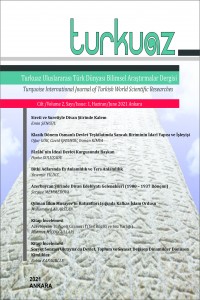