THE FOUNDATION OF NIZAMIYYA MADRASAS AND THEIR IMPORTANCE

The sectarian policies of Amid al-Molk Kondori, who became the Vizier of the Great Seljukid State in 1055, brought a weakening of Sunni teachings in the Seljukid territories. Seeing this as an opportunity, Shiite Fatimids increased their propaganda activities to an upper level. All of these would change with the ascendance of Alp Arslan to the Seljukid throne. Indeed, the new vizier appointed by Alp Arslan, Nizam al-Molk, belonged to the Shafi’i-Ashari school. When Nizam al-Molk got Sultan Alp Arslan’s permission to build a madrasa in Nishapur where the education was going to be conducted according to Shafi’i school, the sultan asked him to expand the Shafi’i education to the whole country. Thus, the process of building the Nizamiyya madrasas began. After Nishapur, new madrasas were built in Baghdad, Balkh, Herat, Esfahan, Basra, Merv, Amul, Mosul, Bushanj, Kargerd and Rayy. Nizamiyyas were the first systematic madrasas founded in the Islamic world. As the madrasas were financially supported by endowments, all the needs of professors and students were provided within the madrasa system. The Nizamiyyas constituted a model would be imitated not only in the Islamic world but in many universities founded in Europe. In accordance with their founders’ vision, the Nizamiyya madrasas produced graduates who were employed in the Seljukid State. 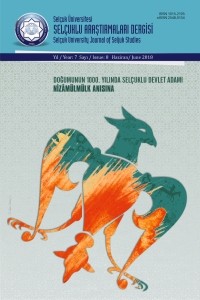