The 12th Century Mediterranean World had witnessed important changes in political, social and economic terms. A new order had begun in the East as a consequence of the Crusades. The "New Europe" model was being shaped in the West, where large political authorities pursued deep policies. On the other hand, following the Byzantine Empire overcoming the multidimensional crisis that was being experienced in the 11th century, the rise of the Empire began with the Komnenos Restoration. Consequently, the Empire became one of the important regional actors. While the aforementioned processes developed around certain factors, they also led to positive developments in the economic structure of the Byzantine Empire, specifically in the economy of production and change. In this regard, we will focus on how the aforementioned economic changes influenced the regional economy of Byzantine Anatolia, a region that covers West and Northwest Anatolian cities. This evaluation will be made by taking into account the criteria that effected the urban economic phenomenon directly. The innovations recorded in 12th Byzantine period, developments in the manufacturing industry of Byzantine Anatolia and changes in the demographic structure of the Byzantine Anatolia will be of main interests. The reason why we focus on Pergamon, which coincides with the characteristics of the current century, is due to being a forgotten city with a resembling economic and demographic revival. The development of the city throughout the historical process, the untangling in the economic and social system and evolution of the city in the 12th century will be examined. 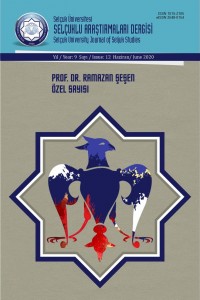