FINANCIAL ANALYSIS OF HOSPITAL COMBINATIONS: AN APPLICATION IN PUBLIC HOSPITALS

Scarce resources should be managed in the best way in order to distribute the shares allocated to health in a rational and fair manner. For this purpose, financial analysis is needed to determine how resources are used and to use them better. Thesis work the 6-year financial statements of the relevant hospitals, 3 years before the merger (2013-2015) and 3 years after the merger (2016-2018). According to the data determined as a result of the study, it was seen that the desired financial targets were not achieved in the merger of Sivas State Hospital and Sivas Numune Hospital. It has been determined that with the merger of the hospital, the liquidity situation deteriorated, the net working capital became negative, the amount of commercial debts increased and these debts were in the form of short-term debts, the debt payment day period was extended, and the increase in expenses was much more than the sales, although net sales increased with the merger. has been done. This situation, on the other hand, caused the hospital to suffer permanent losses, deteriorate the equity structure and melted its own resources. Moving away from the desired purpose in the merger, the institution went into an inefficient state. 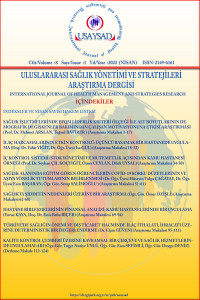