The urban development of İzmir, which has been a long-term homeowner, began to increase since the 17th century and became a trade

and port city with the influence of the industrial revolution in the 18th century and later. Having preserved this vitality until the last

period of the Ottoman period, İzmir became a place with great fire during the War of Independence and was reshaped with the understanding

of finding a national identity during the Republican period.

During the Republican era, many works were exhibited in İzmir with the first national architecture movement. The Akseki Han is one of

the works bearing the characteristics ofthe movement. The exterior decoration of the building is important for reflecting the Ottoman

Period style. Kütahya tiles were used in the building. In this research I mentioned the characteristic features of Kütahya tiles, the situation

of the tiles on the outside of the han was evaluated, problems were identified and suggestions were presented on it. 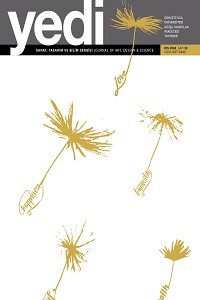