One of the key components of political stability is relations with institutions, which refers to the relationships between the government and higher judicial organ, government and presidency, government and military bureaucracy, government civil bureaucracy and independent economic institutions, and relations with international institutions. The importance of institutions for economic development and stability has been thoroughly discussed by both the old and new schools of institutional economics, who developed theses against the Classical and Neo-Classical paradigms. In the study, we utilized VAR-VECH-TARCH models to understand spillover effects between our newly introduced Institutional Interaction Index (II), markets returns (BIST 100, FX), and risks (CDS). The Institutional Interaction Index, the novelty of this paper, was obtained from data published daily by S. Bilişim. According to the results especially in the long-term spillover exists between all variables. The results from this study support institutionalist approaches. As the relations with institutions deteriorate, BIST100 and FX rate volatilities, that is, instability, increases due to the increase in market risks. 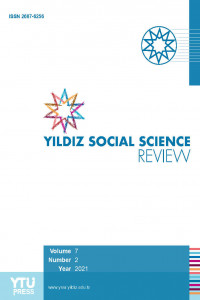